Some companies in the facilities management industry pledge to pay their staff an independently calculated living wage – let’s take a look at the latest updates on what’s happening in the FM industry.

Rising Cost of Living – The Real Living Wage in FM

As inflation hits the highest levels seen in decades, research from the Living Wage Foundation suggests that, even with the recent increase in the National Living Wage, it still leaves the UK’s lowest paid workers at hundreds of pounds of a salary that covers the cost of living, and thousands less for workers in London.

The analysis found that a UK worker earning the national living wage would need an additional £780 each year to bring their income in line with the actual living wage. This difference is equivalent to three months (13 weeks) of food bills or ten weeks of housing costs, according to national averages.

There are currently 4.8 million jobs below the real living wage in the UK, which equates to one in six workers.

Almost 10,000 UK employers in total have signed up to pay the real living wage, the only wage rate calculated according to the cost of living in London and the UK.

All EMCOR UK employees paid at living wage or above

EMCOR UK, which employs more than 4,000 people in facilities and workplace management roles, recently announced that all of its employees are being paid living wage or more – more than a year ahead of schedule.

EMCOR UK was accredited as a Recognized Service Provider by the Living Wage Foundation in May 2021, with the ultimate aim of paying all of its 4,170 employees living wage or higher within two years of the date on which they have become a recognized service provider.

Achieving this goal in less than a year, EMCOR UK now not only pays all of its staff the real living wage, but also includes real living wage options in all its offerings.

A study by the Living Wage Foundation finds that 80% of employers believe that paying real living wages has improved the quality of work for their employees, while absenteeism has fallen by around 25% and 75% say it increased. employee motivation and retention rates.

The group works to encourage wider adoption of fair compensation and to make the accreditation system more efficient.

RSPs are companies that employ outsourced staff. Of the 10,000 businesses registered for Living Wage Foundation accreditation, 177 fall into this category.

Sebastian Bachelier, Program Manager at the Living Wage Foundation stressed the importance for companies of this type to support the scheme:

“For this reason, Recognized Service Provider Accreditation was created, giving the client the ability to secure a real living wage for their third-party contract staff, while being able to consider the benefits to their business. These benefits may include improved retention rates, higher productivity levels and more motivated and engaged staff members.” 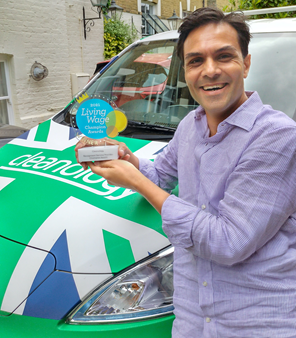 Dominic Ponniah added: “As a company, we have been advocating for Real Living Wages for over a decade and using media platforms to highlight the need for industry support, as well as ordering independent research on attitudes towards fair compensation among facility management and business at large. . Winning a Living Wage Champion award in 2021 was a career highlight, and one I look forward to building on.

Cleanology also publishes a monthly report on the number of new customers signing up for the Living Wage. In January, this figure was 100%. In total, more than 70% of the company’s workforce is paid at the real living wage rate or higher; the objective is to reach 80% by the end of the year, to reach 100% within two years.

To learn more about the Living Wage Foundation and how to register, Click here.

Image: A photograph of some people working at a desk, standing, looking at documents. Image credit: Unsplash

EMCOR UK is recognized by the Living Wage Foundation

EMCOR UK has been accredited as a Recognized Service Provider by the Living Wage Foundation. As a recognized service provider, EMCOR UK is committed to paying Real Living…

How the National Living Wage hike could impact your security services

With many officers being paid the national living wage, the security workforce will be among the hardest hit by the coming changes. Julie Hulme from Expeditious…

To end 2021 on a high note, we’ve rounded up the latest good news from the FM community and the built environment. Real living wage…

More than £1.5billion in pay rises have been put back into the pockets of over 260,000 low-wage workers over the past 20 years, thanks to…

BAM Facilities Management, part of BAM Construct UK, has been accredited as a Recognized Service Provider by the Living Wage Foundation. This recognition means that BAM pays…

The British Cleaning Council has renewed its commitment to be a living wage employer, encouraging member organizations to support the payment of Real Living…