By Patrick O’Donnell, for Le74million.org

When the Cleveland School District launched an ambitious $125 million college scholarship program two years ago, the hope was that it would change the lives of students in a city with the highest poverty rate in the country.

But district CEO Eric Gordon knew scholarships and a degree wouldn’t be enough for many Cleveland students from families earning less than $20,000 a year and never going to college.

Even as cheers still echoed from the stock market celebration, Gordon was rallying businesses and nonprofit groups in his bid to directly attack the generational poverty and unemployment plaguing Cleveland — a program to connect thousands of high school students to real jobs with decent wages and a focus on a satisfying life.

Working primarily on Zoom during the pandemic, a team of more than 115 Cleveland leaders built Planning And Career Exploration (PACE): Here to Career, designed to create clear pathways to middle-class jobs for all students through internships, apprenticeships, observation internships and company visits.

Already, more than 70 Cleveland businesses have signed up to be part of the program, including hospitals and a major banking chain.

The effort comes at a time when businesses are facing labor shortages as the country emerges from the pandemic, which could prompt Cleveland businesses to train students.

But Cleveland’s program faces daunting challenges. Similar programs in other US cities have not reached large numbers of students. PACE must overcome business concerns about training costs and student behavior, as well as the logistical issues of having students in the workplace.

It is also a change of mentality for the district. The long-standing goal of preparing students for the separate silos of college or career, which later merged with college and career. shrinks even more.

“College, two-year college, trade school is a path to a career,” Gordon explained. “But the same goes for apprenticeship, internship, learning to earn, (going) directly to the labor market. And so the goal must be the “career”.

A key part of PACE is to make work-based learning a standard part of high school for all students, not just those in vocational programs or top college students.

“We built it as a universal goal – everyone should have these things,” said Anthony Battaglia, executive director of career and college pathways district.

It’s a major challenge that requires a shift in the school and business culture that would set Cleveland apart from other cities. Workplace learning programs in American cities have been unable to succeed for large numbers of students.

In Nashville, for example, where an intense program of career exploration has existed for more than a decade, only about 20% of seniors have the opportunity to do an internship before graduating.

Although European countries have a culture of companies training young people, American companies are reluctant for a host of reasons – including insurance issues, concerns about students lacking the skills to do the job, and school schedules that conflict with office hours. Transportation is also a barrier, especially for students who rely on limited public transportation systems. Companies also do not have a guaranteed return on their investment.

But many American cities need to better connect students to well-paying jobs that bring economic security and a middle-class life.

The nation has a ‘skills gap’ with too many job seekers lacking the qualifications for well-paying jobs. Others see it as an “opportunity gap,” where too many disadvantaged groups have never had the chance to learn what they need to be competitive.

“Many low-wage workers, especially black, Latino or Hispanic and Indigenous workers, are trapped in multi-generational lower caste jobs without access to professional exposure, quality education or professional networks,” wrote Anneliese Goger, a researcher at the Brookings Institution. “We need to focus on job creation and investments in education that provide all residents with broad career options and several routes to new careers.

Helen Williams, who runs educational programs for the Cleveland Foundation and helped lead the creation of PACE, said her visit to the Netherlands and Finland in 2014 inspired her to bring elements of the European model here. 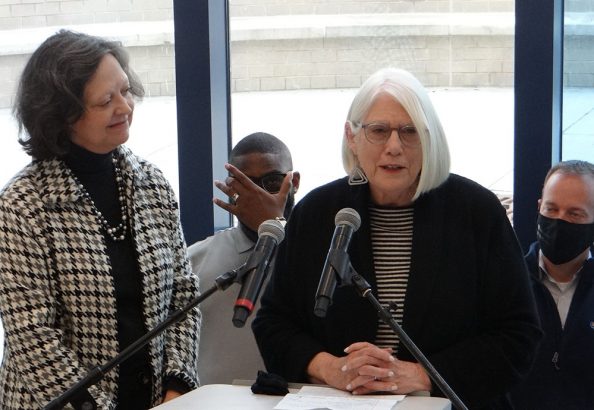 “We want students to dive deep into what a professional career looks like,” she said. “Employers have the opportunity to interact with their students and see these programs not as charity, but as real help in developing the future workforce.”

She hopes PACE can spark a gradual shift in corporate culture here.

“How do you make that part of DNA?” Williams asked. “How do you bring people together to make it seamless? It really is a question mark.

Even before the pandemic, Cleveland had a greater need to connect students to jobs than other cities. It has the highest poverty rate – 30.8% – in the United States and the worst child poverty rate in the country, with 46% of children living below the poverty line.

Census data shows that only 16% of adults in Cleveland have earned a bachelor’s degree, well below the 30% or more for the region, state, and nation.

PACE aims to address these issues beginning in sixth grade, when students learn about jobs and finances, and eventually place high school students in workplaces.

The hope is that students from poor Cleveland families will be exposed to the ideas and concepts that affluent, suburban parents often teach their children – the careers available to graduates, the jobs that match their interests, and how to get diplomas or certificates to succeed.

At each stage, companies can choose their level of involvement: at one end, companies can organize tables at job fairs or let students follow employees. At the high end, companies can offer paid internships or apprenticeships. The district hopes to eventually offer the positions to 4,600 high school juniors and seniors each year.

PACE also prioritizes the three sectors that most need employees in the region: healthcare, manufacturing and information technology. 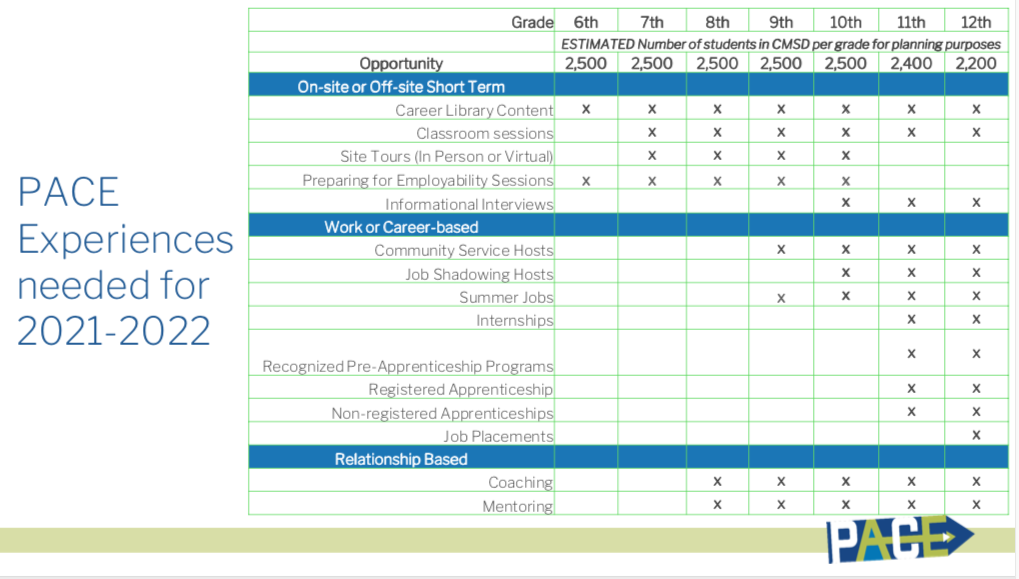 Gordon has seen the needs of the Cleveland workplace for years and has tried to show students what jobs are available to them, beyond the low-paying retail and fast-food jobs that many already have.

The district has established specialized high schools, including one based at the county hospital and one focused on aviation and maritime careers, which do much of PACE’s work by immersing students in these areas while taking preparatory courses for the university.

PACE will make these types of opportunities accessible to many more students, while ensuring that the work experiences really help students. He expects students to do the real work of a job or be trained in it, instead of just watching or answering the phone.

“We all hear about the internship where all you do is have coffee,” Battaglia said. “We want more quality internships.

Paid internships are also a particularly important piece of the puzzle. Gordon said many of his students were already working long hours in fast food jobs because they needed the money immediately.

“We have kids and I had this conversation straight up: Mr Gordon, you want me to quit this job at McDonalds and Dave (supermarket) when I know we’re going to eat?” he said. “We have a lot of children working in food-related industries due to food shortages.”

How quickly the program delivers opportunities remains to be seen.

Some companies are trying it. The Cleveland Clinic, the city’s largest private employer, has pledged to provide paid internships for students, have employees as mentors, and help students with resumes and mock job interviews.

And PNC Bank adapts the PartnerUp program that it runs in its Pittsburgh locations which allows students to apply to work and train for entry-level banking jobs. Students are guaranteed to have at least one interview, if not a job, after the program.

PACE’s growth will always depend on the success of Cleveland businesses with students in the district. Part of that will mean employers will worry about poor behavior and lateness among Cleveland students, the so-called soft skills that are often a barrier to employment.

“We need to change the perception of what a graduate or a student is in the district,” said school board president Anne Bingham. “I think at least in the downtown business community, there’s a misunderstanding about who our students are and what they bring to the table.”

This article is presented in partnership with The74Million.org, a national nonprofit newsroom covering education issues. Patrick O’Donnell is a Cleveland-based education journalist.